Thursday, April 18, 1912
Around 9:30pm
Darkness and heavy rain have delayed the warping of the Carpathia to the dock. A crowd of 10,000 to eventually 30,000 people have gathered, and are awaiting the arrival of Titanic's survivors. Among the crowd is a large detachment of city officials, immigration commissioners, doctors, priests, sisters, nurses, ambulances, and coroners. The Salvation Army is also there to care for the survivors of Titanic’s steerage passengers. Delegates from the New York Stock Exchange have sums of cash for those who have lost everything. Organizations such as the Boy Scouts of America along with many others have set up fundraisers to help those in need.
Once the Carpathia was tied to the dock and the gangway prepared, a large number of stretchers were taken aboard. As Titanic's passengers began making their way down the gangway it soon became evident to the crowd that a large number of survivors had lost all their clothing, and had to make due with whatever was available to them aboard the Carpathia. Some were ill physically and or mentally. Others were violently hysterical, and evidently deranged, while there were a considerable number of cases that were in a state of shock. As the survivors made their way to the street, silence fell over the crowd, and even the flashes of the Press photographers' cameras ceased for a moment.
Dr. Henry Frauenthal and his wife were the first to land from the Carpathia. They were driven off quickly in a motor car, and no one had any opportunity to speak to them. Many soon followed in the same manner.
Some of the survivors needed assistance getting down the gangway such as Titanic's Wireless Operator Harold Bride who had injuries to his feet. One was sprained and the other had frostbite. 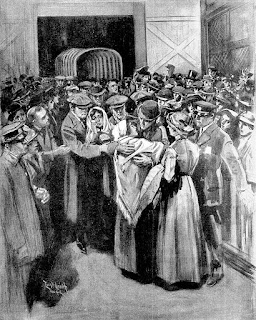 As Titanic's survivors disembark, the people in the crowd started shouting out names in hopes to get a response. The people that were reunited with their loved ones clung to them and kissed them tenderly.
The sick and injured of Titanic's survivors were carried on stretchers and taken to a hospital by ambulance.
For the others that waited and waited but never saw their loved ones, it was a horrible reality. Out of the 2,208 people aboard Titanic only 712 survived. That meant 1,496 were dead.
One man in the crowd waiting to greet the survivors is William Alden Smith, a U.S. Representative and Senator from the state of Michigan. He has been appointed to investigate the sinking of Titanic. Senator Smith along with a group of U.S. marshals board Carpathia. He has a handful of subpoena, one of which is for Bruce Ismay. The investigation hearings begin the very next day and Senator Smith wants Ismay to be there.
Article By: Joshua Allen Milford - Titanic Historian
Article Tags: Henry Frauenthal, Investigation Hearings, J. Bruce Ismay, New York, SS Carpathia, Survivors, Titanic, William Alden Smith
Newer Post Older Post Home
WELCOME!
Click here to learn more about this site.﻿