Thursday, April 18, 1912
Evening
By 6pm, Carpathia slowly makes her way through the dark and rainy evening, a harbor pilot from the Ambrose lightship is brought aboard as well as an escort of tugboats to lead her into New York. Private craft surround Carpathia. Photographers' camera flashes light up the evening and reporters shout out questions with megaphones. One reporter manages to board the ship only to be grabbed by crew members and taken below deck. Some people in the boats surrounding Carpathia hold up signs asking for Titanic survivors by name. Nearly 30,000 people gather at the Cunard's pier 54 braving the rain and cold waiting for Carpathia to arrive. Nearly all of New York's police force was on duty. Hundreds of officers were required to hold back the crowds of people. Many were relatives of the survivors desperately seeking answers.
Around 8pm, Carpathia appears out of the rainy darkness only to be lit up by the constant flashing of photographers' cameras. The crowds watch in confusion as Carpathia slowly moves past her Cunard pier 54 and stops at White Star's pier 59. After a few moments it all becomes clear as Carpathia's crew begin unloading Titanic's lifeboats at the pier where Titanic would have docked. Only 13 lifeboats were all the remained of the great liner. 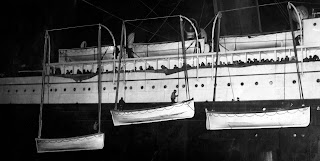 After all of Titanic's lifeboats were unloaded from Carpathia's deck, she slowly makes her way back to the Cunard dock. The crowd grew silent as the gangplank was lowered, and by 9:30pm Titanic's survivors began to disembark.
Article By: Joshua Allen Milford - Titanic Historian
Article Tags: Lifeboats, New York, Rescue Ship, SS Carpathia, Survivors, Titanic
Newer Post Older Post Home
WELCOME!
Click here to learn more about this site.﻿