A Closer Look: Differences Between Olympic and Titanic 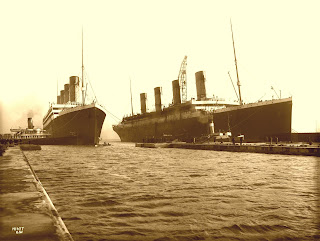 Since Olympic was 50% bigger than the biggest ship afloat, no one knew how she would handle out on the open seas. She was the first of the "Olympic Class" and was sort of the guinea pig of the class.

Olympic sailed on her maiden voyage on June 14, 1911. Thomas Andrews and Bruce Ismay were on board during the maiden voyage just as they would be for Titanic's a year later. Andrews went along to spot areas for improvement and to fix problems before the ship arrived in New York.

Even though Olympic and Titanic were considered twin sisters, to a shipbuilder it's a common goal to make your newest ship better than the last. So Andrews made some modifications to the design of Titanic while she was still under construction. Some of the modifications were obvious and some weren't.

The most obvious were:

"Like the Olympic, yes, but so much more elaborate. Take the dinning saloon - Olympic didn't even have a carpet, but the Titanic - ah, you sank in it up to your knees."

-Baker Reginald Burgess
With all of Titanic's improvements and modifications she exceeded Olympic in volume and weight. Her gross registered tonnage (GRT) was 46,382.54 tons, a measure not of weight but of volume. Her displacement weight was 52,310 tons, even more than Olympic at 52,067 tons. Titanic was the heaviest ship afloat earning her the title as the largest ship in the world.