A Closer Look: The Iceberg That Sank the Titanic

When the Carpathia came to the rescue in the early hours of April 15th, it wasn't until the sun had risen that the massive ice field that had laid in Titanic's path was revealed. The iceberg that Titanic had collided with was only one out of many that were floating in front of what turned out to be a low wall of ice that was blinding white in the sunlight. If Titanic had never hit an iceberg, she would have encountered the ice field instead. If this scenario had happened, she would have probably stopped for the night just like the other ships in the area had done. Ironically, it was the same ships in the area that had previously warned Titanic about the ice the day before.


The Collision
We all know that Titanic did indeed hit an iceberg. It happened at 11:40pm on April 14th. The iceberg was spotted by Lookouts Fredrick Fleet and Reginald Lee only 37 seconds before impact. It has even been suggested that 1st Officer Murdoch may have seen the berg and was already taking action moments before the lookouts had notified the bridge. Nevertheless, the iceberg was too close to be avoided by a ship of Titanic's size. In fact, Titanic was so big that the impact was only felt by a fraction of all the people on board. The impact was described as only a vibration, a slight pause in the movement of the ship, or the sensation of "rolling over a thousand marbles" as one passenger testified. It seemed to be a case of curiosity rather than alarm. After all, Titanic was an unsinkable ship. There would be no cause for concern.

The Damage
It has long been believed that Titanic sideswiped the iceberg and that all the damage was located along the starboard side beneath the waterline. Even though there is evidence of damage along the starboard side, it is highly unlikely that Titanic suffered damage to that area only.
Most of an iceberg's mass is underneath the surface of the water. When Titanic struck the berg, there is a good chance that ice hidden below the surface caused damage to the underside of the ship as well. The odds of ice not being there would be extremely rare. The scenario of Titanic "grounding" on ice actually fits better with the descriptions of the impact provided by the passengers and crew. Today, there is more evidence to prove that there was grounding damage as well as the side damage to the ship.

What did the iceberg look like?
There were many icebergs visible the morning after the sinking, and several photos were taken of icebergs either on this day or a few days later by passing ships. Out of the photos that were taken, three icebergs have been given special attention.

One of the icebergs in question was photographed by the Chief Steward of the German ocean liner Prinz-Adalbert. This iceberg was given the reputation of being the berg that sank Titanic due to it being in the approximate vicinity to the sinking, and what appeared to be a red paint smear at its base. Even though this iceberg is generally accepted as the culprit, it does not fit the description of the testimonies given at the British inquiries.

Another iceberg that could possibly be the culprit was photographed by Captain De Carteret of the vessel Minia, a cable ship that was chartered by the White Star Line to recover bodies that were still floating on the surface. The ship arrived at the scene 11 days after Titanic sank. The iceberg was spotted near the location of the sinking with bodies and wreckage in the vicinity. Still, this iceberg doesn't fit the description of the testimonies given.

On April 20th, the German steamer Bremen sailed into the area of the disaster. The passengers on board could see wreckage and the bodies of more than a hundred victims floating on the surface.
Stephan Rehorek was on board and witnessed this horrible scene. He took a photo of an iceberg that was nearby. What Rehorek didn't know at the time was that he was taking a photograph of an iceberg that matched the eyewitness testimony of Titanic's seaman Joseph Scarrott.

"Well, it struck me at the time that it resembled the Rock of Gibraltar... It looked very much the same shape as that, only much smaller."

"As you approach Gibraltar - it seemed that shape. The highest point would be on my right, as it appeared to me."

The iceberg described by Scarrott was one that closely resembled the Rock of Gibraltar, but inverted with the high point on the right. This also seems to be the same view that Rehorek had when he took the photograph. The iceberg also had areas with fresh ice exposed indicating that pieces had recently broken off, or that the berg had suffered damage somehow.

It will never be known for sure, but out of all the photos taken of the icebergs in vicinity of the sinking, the Rehorek iceberg seems to be the most likely culprit. It's location, appearance, and size seems to be the best match with eye witness testimony.

In The Movies
In the 1958 film "A Night To Remember", a recreation of the Prinz-Adalbert berg was used. Then in 1997, James Cameron who is known for being a perfectionist decided to use the Rehorek berg for his film "Titanic" to better fit historical accounts.


The Mirage Effect
For decades the theory has been that the reason for the lookouts not seeing the iceberg in time was due to the fact that there was no moon, the ocean was dead calm and therefore no crashing waves at the base, and that the iceberg was a clear or dark color. During the American inquiries, Lookout Fredrick Fleet gave testimonies of what he saw. He never did describe what the iceberg looked like. That was mainly because what he saw was a dark mass that blocked out the stars on the horizon.

In 2012, researcher Tim Maltin released his six-year study on why the lookouts couldn't see the iceberg in time. He believes a mirage effect was created by air currents that rushed across the cold surface of the water had caused an optical illusion of a false horizon. Similar to the mirage effect seen on a hot street during a summer's day.

Maltin analyzed previously unseen weather records taken from more than 75 ship's logs from the week the Titanic sank. He found that a unique set of weather conditions caused an abnormal bending of light known as "refraction." Even though there were clear conditions that night, the mirage horizon camouflaged the iceberg and caused the lookouts to spot it too late.

"For years Titanic's lookouts were not believed when they said the iceberg came out of a haze on that clear night, but now we know they were telling the truth."

"It's nice to know that so many lives were not lost simply as a result of avoidable human mistake, but that it was a set of circumstances so peculiar that the crew were caught out."

"Several of the logbooks I found recorded miraging and abnormal refraction, which are common in cold water areas, such as the Labrador Current." 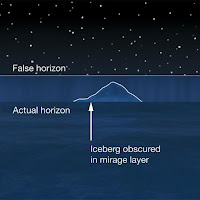 Maltin found that the cold water of the Labrador Current had only recently arrived at Titanic's crash site, cooling the warm air of the Gulf Stream, from the bottom up. This created a strong thermal inversion, where warm air lies above cold air and causes light to bend. To the Titanic's lookouts, the horizon would have appeared higher than normal and disguised the iceberg's outline.

"My research reconciles much previously unreconciled testimony and reveals that Titanic sank at the center of a perfect storm of atmospheric conditions."
-Tim Maltin