It has been nearly four hours since Carpathia had first responded to Titanic's distress call. Captain Rostron was getting everything and everyone ready to receive Titanic's survivors, all while pushing through the icy Atlantic at top speed. The Carpathia reaches Titanic's reported position around 3am to 3:30am only to find nothing. Carpathia sends a message to Titanic saying, "If you are there, we are firing rockets.".

As dawn appeared, all that was left of Titanic were her lifeboats. They were scattered for miles across the horizon among hundreds of icebergs. 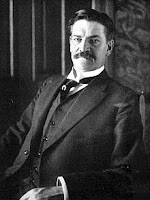 "It was at quite an early stage that I had seen that I had seen far in the distance, the unmistakable mast lights of a steamer about four or five points away on the port side. My eyes were fixed for hours that night on the lights of that steamer far away in the distance, which afterwards proved to be those of the Carpathia. To my great disappointment they seemed to make no progress towards our rescue. This we were told later, was due to meeting an iceberg as she was proceeding full speed to the scene of the Titanic's wreck. She had come to a stop, and sighted the lights of our lifeboats, or such has had them. Finally, dawn appeared and there on the port side of our upset boat where we had been looking with anxious eyes, glory be to God! We saw the steamer Carpathia about four or five miles away with other Titanic lifeboats rowing towards her."

With the new light of dawn and with Carpathia visible in the distance, Titanic's survivors begin rowing toward the rescue ship. Some of the lifeboats are reorganized and tied together by Titanic's surviving officers before proceeding. The overturned collapsible B is sinking fast and it's passengers are transferred to other lifeboats close by. Many of the the lifeboats that were overloaded had their passengers transferred to other boats as well.

The rescue of Titanic's survivors has begun.