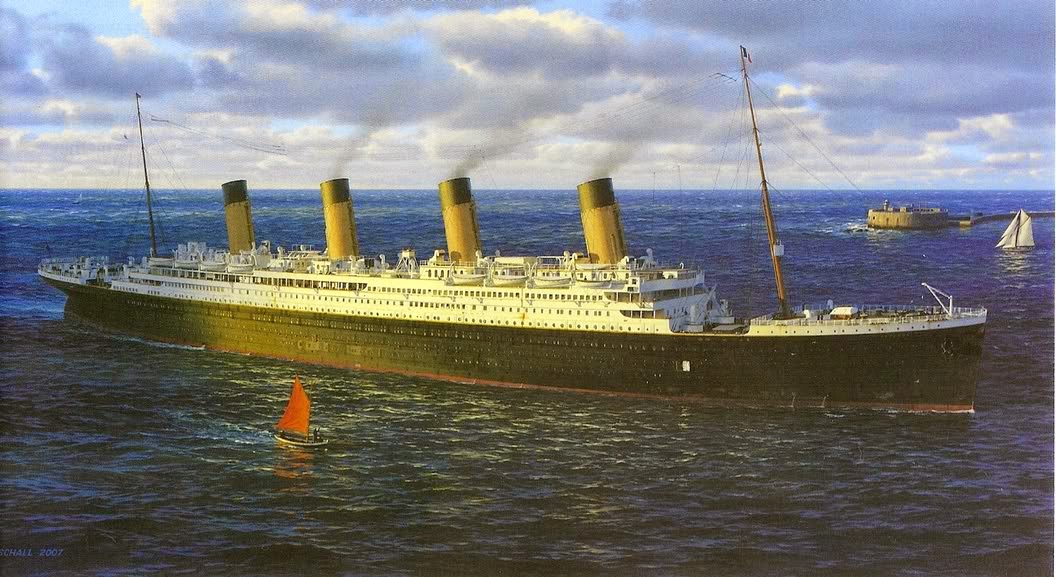 The trip from Southampton to Cherbourg was the most glamorous cross channel commute in history. Titanic was the finest ship in the world and was literally a floating palace. Seeing her from a distance with her black and white hull with a yellow stripe from bow to stern, and her four tan and black colored funnels towering above the deck, must have been an impressive sight.

Titanic's interiors and the first class accommodations would match any 5 star hotel on land. Some of the passengers that boarded at Southampton were not making the trip all the way to America, but just to Cherbourg. During this short trip, these passengers were feed a fantastic lunch and were able to tour different parts of the ship. Titanic arrived at Cherbourg by sunset and 24 passengers and 1 canary left the ship.

Most of the people that boarded the ship at Cherbourg via Nomadic were wealthy travelers that were on vacation. Some of these passengers included...

Col. John Jacob Astor IV and his new 18 year-old wife Madeleine- The Astors were on an extended honeymoon waiting for the gossip to calm down, but braced for scandal upon their return to New York. Madeleine was a year younger than J.J. Astor's son Vincent. J.J Astor was the wealthiest man to board the ship.

Margaret "Molly" Brown- She had been called back to the U.S. because her son had become ill, while she was touring Egypt and France with the Astors. She would be know to history as "The Unsinkable Molly Brown".

Benjamin Guggenheim- American businessman and mining tycoon. He was considered a playboy and was traveling along with his mistress, a French singer named Madame Léontine Aubart. His wife and children were waiting for him in America.

This was the royalty of the Guilded Age, the who's who of society. Captain Smith will great them all personally. No expense was spared for their comfort and pleasure.