From the Drawing Board to the Real World: Olympic's First Keel Plate is Laid 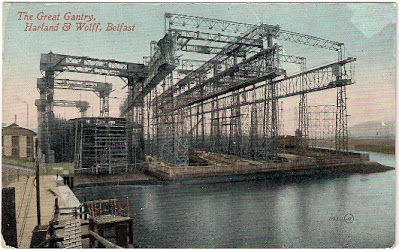 Late 1908, the dream of the next generation of ocean liners moves from the draftsman's table to the real world. To accommodate the building of the massive size of the new Olympic Class ships. Harland and Wolff has to convert 3 of their already huge slipways into 2 bigger slipways. By the end of 1908, Harland and Wolff had designed the tallest gantry ever that stood over the slipways.
This gantry, known as the Arrol Gantry named after Sir William Arrol. He was a Scottish civil engineer and was contracted by Harland and Wolff to construct the enormous gantry. The gantry was equipped with heavy machinery for the construction of steel ships. Also, bridges that would allow the ship workers to get from one end to the other. This system of construction made it possible to build ships as big as Olympic, Titanic, and Britannic.


Once the gantry was completed. Harland and Wolff started to hire ship workers in record numbers. They lay Olympic's first keel plate beneath the gantry that towers over Belfast. The Lagan river behind the gantry and had to be dredged to 50 feet to accommodate the launch of these new super liners, and to support ships with a deeper draft. Meanwhile back in Southampton, White Star arranges for similar dredging. While all this is taking place, Bruce Ismay is in America doing whatever is necessary to make sure that the piers in New York will be long enough for his liners to dock.