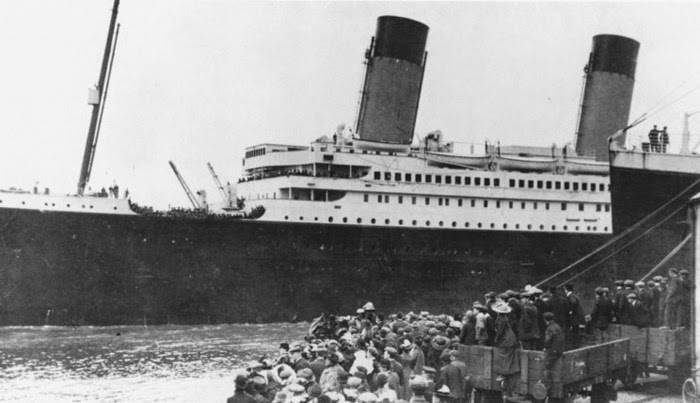 Titanic had an exciting send off from Southampton dock, but no one anticipated the events that were about to occur. Just as Titanic left the dock and began to move through the channel, she almost suffered the same kind accident that Olympic had with the HMS Hawke less than a year before. As Titanic left the dock and made the turn to head for open sea, she passed the steamer SS New York that was tied to the dock along with SS Oceanic. Titanic began to pick up speed and caused some suction to occur in the crowded channel. The suction pulled the New York toward Titanic. The New York's lines snapped like rubber bands with sounds like gunshots. With the New York free in the water, nothing could stop her from ramming Titanic's hull. If it wasn't for the fast actions of the tugs and Titanic's harbor pilot, the two ships would have collided. The tug boats that had just recently cast off their lines from Titanic, were able to secure their lines and pull back the New York, stopping her from hitting Titanic with only feet to spare. The New York was towed around the corner of the dock and was secured. Once everything was clear Titanic received permission to proceed. One hour behind schedule she began to make way for open sea.

"As the Titanic moved majestically down the dock, the crowd of friends keeping pace with us along the quay, we came together level with the steamer New York lying moored to the side of the dock along with the Oceanic, the crowd waving "good-byes" to those on board as well as they could for the intervening bulk of the two ships. But as the bows of our ship came about level with those of the New York, there came a series of reports like those of a revolver, and on the quay side of the New York snaky coils of thick rope flung themselves high in the air and fell backwards among the crowd, which retreated in alarm to escape the flying ropes. We hoped that no one was struck by the ropes, but a sailor next to me was certain he saw a woman carried away to receive attention." "And then, to our amazement the New York crept towards us, slowly and stealthily, as if drawn by some invisible force which she was powerless to withstand. On the New York there was shouting of orders, sailors running to and fro, paying out ropes and putting mats over the side where it seemed likely we should collide; the tug which had a few moments before cast off from the bows of the Titanic came up around our stern and passed to the quay side of the New York's stern, made fast to her and started to haul her back with all the force her engines were capable of; but it did not seem that the tug made much impression on the New York. At first all appearance showed that the sterns of the two vessels would collide; but from the stern bridge of the Titanic an officer directing operations stopped us dead, the suction ceased, and the New York with her tug trailing behind moved obliquely down the dock, her stern gliding along the side of the Titanic some few yards away." "It gave an extraordinary impression of the absolute helplessness of a big liner in the absence of any motive power to guide her. But all excitement was not yet over: the New York turned her bows inward towards the quay, her stern swinging just clear of and passing in front of our bows, and moved slowly head on for the Teutonic lying moored to the side; mats were quickly got out and so deadened the force of the collision, which from where we were seemed to be too slight to cause any damage. Another tug came up and took hold of the New York by the bows; and between the two of them they dragged her round the corner of the quay which just here came to an end on the side of the river." "We now moved slowly ahead and passed the Teutonic at a creeping pace, but notwithstanding this, the latter strained at her ropes so much that she heeled over several degrees in her efforts to follow the Titanic: the crowd were shouted back, a group of gold-braided officials, probably the harbour-master and his staff, standing on the sea side of the moored ropes, jumped back over them as they drew up taut to a rigid line, and urged the crowd back still farther. But we were just clear, and as we slowly turned the corner into the river I saw the Teutonic swing slowly back into her normal station, relieving the tension alike of the ropes and of the minds of all who witnessed the incident."

It was a close call, but many passengers thought it was bad luck to start the maiden voyage in such a way. Ironically, if Titanic and the New York had collided, it would have delayed the maiden voyage and Titanic may not have struck the iceberg later during the voyage.