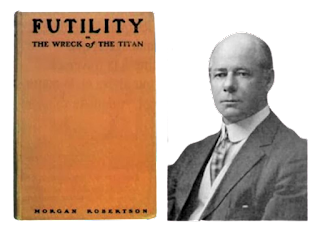 I've been interested in the Titanic since its discovery in 1985. I started seriously researching Titanic in 1997 when I was a teenager, and began collecting books, which by now has turned into a large library.
There is one book in my collection that still baffles me to this day. It is a short novel called "Futility" or "The Wreck of the Titan", written in 1898 by Morgan Robertson.
Robertson was an American writer and what some considered to be somewhat of a psychic due to his eerie predictions of future events in his short but compelling stories.
In his book he tells of "Titan", a huge ocean liner that strikes a North Atlantic iceberg and sinks with a great loss of life. The size, speed, and fate of his ship are strangely similar to that of Titanic. You must remember that the original version of this book was written in 1898 and construction on Titanic didn't begin until 11 years later in March, 1909.

In 1914, two years after the Titanic disaster, Robertson released a new version of "Futility" in a volume that also included "Beyond the Spectrum", a story of America and Japan going to war after Japan conducts a sneak attack on an American fleet of ships. Strangely similar to an event that would happen at Pearl Harbor 27 years later.
Was Morgan Robertson just a very good writer, or was he something more?
Article By: Joshua Allen Milford - Titanic Historian
Article Tags: Futility, Morgan Robertson, Predictions of Titanic
Newer Post Older Post Home
WELCOME!
Click here to learn more about this site.﻿